It was an awesome movie. And there's no doubt that malls are enjoying a crap load of money. I think SM Cinemas earned the most though. They reserved ALL their cinemas for the Avengers because they knew thousands of people will be coming.

Anyway, I managed to reserve my IMAX ticket 10 days before its debut here in the Philippines. People around me wondered why I didn't choose to watch the movie on its debut. I believe that it's not about how soon you get to watch the newest movie. It's all about the overall movie experience. I didn't pick the earlier dates because I wanted to avoid long lines of people at cinema entrances. But when I got to SM City North EDSA's IMAX Theater 4 hours ago, it was chaos. People were complaining about the long lines and SM's undermanned ticketing team. All the soft velvet-covered couches at the waiting area were occupied by people. Kids were running around pretending to be superheroes. Lovers taking pictures together. It was horrible. See for yourself: 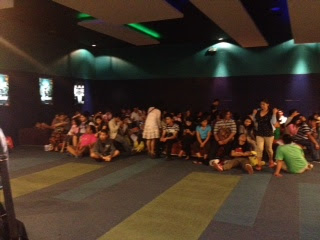 Oh, and I saw the ticket booth's whiteboard filled with different dates. All of em' were paired with 2 words, "SOLD OUT".

I actually complained to one of the theater's staff because some people were cutting lines. Anyway, one of the things that really pissed me off is when their ticketing machines stopped working. I was furious about it because it's really hard to manually let their staff print the ticket. You have to put the OR number of the ticket you bought online in a piece of paper. And then hand it to them and wait like 10-20 minutes for processing -- which totally depicts the purpose of reserving tickets online. Convenience.


Luckily, the theater's big boss showed up and fixed the machine himself. I finally got my ticket. 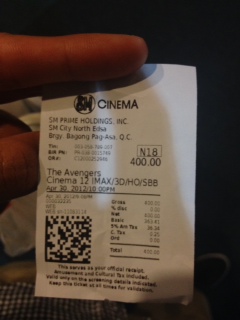 So I got in, watched the movie for 2 hours and 20 minutes. And guess what? The awesomeness of the movie made it "non-reviewable". And I don't think it's fair to really review it since the IMAX experience overwhelms even the crappiest movies out there.


IMPORTANT TIP: To fully enjoy the 3D IMAX experience, you must seat at either L18 or M18. Those rows and seat numbers have the best viewing angle. And probably takes advantage of the theater's massive screen. I wasn't able to fully enjoy it because I sat at N18. It didn't give me an edge-to-edge viewing angle. The 3D effect is way better if the screen totally occupies your line of sight. My experience wasn't really a "nn-your-face" 3D watching. I was a bit far. I miscalculated the distance. Damn.

Joss Whedon took the risk of directing a star-studded cast and I must say, it's the best thing he has ever made. Well done!
Posted by Roegan at 11:23 AM

Email ThisBlogThis!Share to TwitterShare to FacebookShare to Pinterest
Labels: Movies

Is my blog RSS feed-worthy?

Roegan
I'm a full-time Call of Duty player at work. I'm a tech enthusiast. I'm also a singer. I love Jazz and Rock music. I live by the Golden Rule. I'm a keeper. I love God, my family, and my friends. Bachelor for life... I will never surrender!