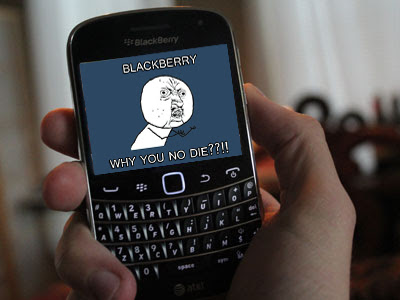 I'm not a BB hater. In fact, I admire them for offering an affordable messaging service (BBM) that most Filipinos can afford. But it's hard to deny the facts that all points towards BlackBerry's fall. They're dying.

I've read something really bad about the way BlackBerry's going to handle things when they release their new mobile operating system. The next big thing coming from RIM is a new smartphone operating system called "BlackBerry 10". It's supposed to be the platform that'll save RIM's rotting smartphone business.

I personally don't know a lot about BlackBerry 10. BlackBerry doesn't get the light of the day when it comes to positive media coverage. Based on my observation, most BlackBerry news are all negative. Plunging stocks, stolen devices (lame), and of course, NOT getting laid on the first date if you happen to own one.

Supposedly, BlackBerry 10 will be a major revamp of the BlackBerry platform you're used to, finally bringing it on par with Apple's iOS, Google's Android, and Microsoft's Windows Phone 7. Well, at least, that's what RIM says. BlackBerry 10 is set to launch this coming October with at least one smartphone, assuming RIM will still be remembered by the with the massive launches of the Galaxy S3 and iPhone 5 this coming April and October (rumors) respectively.

BUT there's a problem for BlackBerry fans who OWNS one RIGHT NOW.

Your berry will not be able to upgrade to BlackBerry 10. Instead, you're stuck with your current OS called BlackBerry 7. And you'll be stuck with it FOREVER unless you buy a new berry that has BB10 this October.

Well, it's probably not that bad if you've had your BlackBerry for a year or two. You're likely ready for an upgrade by the time BB10 arrives. But Globe, Smart, and Sun are still marketing BlackBerry 7 phones heavily in the market. So please, don't be fooled. Let this post be a warning to ya'll. NOW is NOT the time to buy BlackBerry phones. If you're really a fan of a dying business, I suggest that you wait for the BlackBerry 10 phones.

But that doesn't mean you can't be Bold and join YugaTech's BlackBerry contest.

Email ThisBlogThis!Share to TwitterShare to FacebookShare to Pinterest
Labels: Technology

Is my blog RSS feed-worthy?

Roegan
I'm a full-time Call of Duty player at work. I'm a tech enthusiast. I'm also a singer. I love Jazz and Rock music. I live by the Golden Rule. I'm a keeper. I love God, my family, and my friends. Bachelor for life... I will never surrender!